The Air I Breathe, Part II 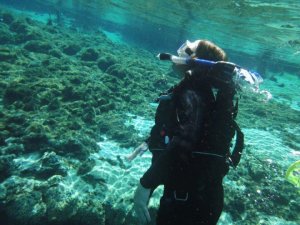 When I ended the first post about my scuba certification experience, I meant what I said about scuba being good therapy for control freaks.  The depth of my vain attempts to control things and people beyond me showed up in my response to the whole process, and in the anxiety stirred in my heart when those attempts failed.  This post, originally planned to follow that first one by just a few days, was to tell the rest of the scuba story and explore those issues of control and anxiety some more.  In the meantime, though, sorrow and grief invaded the life of a friend, and all words seemed petty and inadequate.  Control was shown, again, to be an illusion, indeed.

Since April, one friend’s cancer recurred and another’s brain tumor was diagnosed.  One friend lost her step-mother; another, her son.  A treasured friend moved across the country.  Another friend’s mother suffered a massive heart attack.  A client lost a spouse.  A former client died.  And, a baby I love seemed set to be born many weeks too soon.  What is there to do, and how is one to be, in the face of this broken world, with all its pain and loss?  Perhaps just breathe in, breathe out, and do the next thing, trusting the One who supplies the air and everything else the ones I love and I need.

The second try at the pool part of my scuba training went much better than the first.  Many people had empathized with my anxiety from the first try, and some who were already divers gave me very helpful suggestions for both getting to the bottom of the pool and passing the underwater, hold-your-breath swim test.  In the end, I passed and moved on to the open water dive section of certification.  Two things stick out from that second day in the pool.

The first occurred, oddly enough, in the shallow end, where I’d had no trouble before.  One of the skills we practiced as a group was taking off our buoyancy compensators (BC’s) and then putting them back on, while continuing to breathe through our regulators.  As soon as I took off my BC, I began to tip over, as though I was lying down on my side on the bottom of the pool.  With no conscious thought, I began to thrash around wildly, trying to keep upright and get back to putting on my BC.  When conscious thought did kick in, it was, “I bet I look like a dying roach from above!”  That was funny, but I was too scared to laugh in my regulator, so I just continued to flail around and struggle until I strapped the BC on and settled back down on my knees on the bottom of the poo.  As I watched the others practice the skill, I realized that the best  thing would have been to fall on over to my side, and then calmly push myself off the bottom and go about finishing the skill.  All that flailing was a waste of energy, and just got in the way of what I was there to do, besides making me look like I’d encountered a big can of Raid.

One thing I’d dreaded about the return to the pool was the underwater swim test.  We had to swim 50 feet underwater without coming up for air.  I’d failed the last time, too spent from all the panic and struggle, and out of shape into the bargain.   This time I had two plans.  I had realized that part of the lesson of the failure was in being reminded of my dependence on God for everything.  So, I planned to sing these lyrics in my head as I swam:

My second strategy was to think of Travis and Jessica, my brother and sister-in-law, who were my chief scuba encouragers and the ones so excited for me to dive with whale sharks when I visited them.  So, with each stroke toward 50 feet, I could think each of their names and distract myself from my lack of oxygen.

As it turned out, I sang the song in my head and pushed off into the 50 feet, only to find myself floating to the surface less than halfway through.  I thought, “You’ve got to be kidding me,” dove back down, and kicked hard to the wall — all strategies out the window.  That’s probably where most of my strategies belong.

I felt exhilarated and relieved to have passed the pool section.  Thinking back on that day, I continue to see that I often struggle against the wrong things, and that all my planning and strategizing is most often beside the point.  Learning to relax, trust the One is is in control, and just do the next thing doesn’t come any more naturally to me than breathing underwater.  Jesus calls me to those things, though, in calling me to Himself.  He really is the air I breathe.  Amen.

2 responses to “The Air I Breathe, Part II”