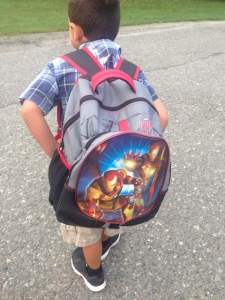 I sat in the drab airport, swiveling my head from side to side, checking my phone for texts every 30 seconds or so, trying to breathe deeply and relax. I wanted to see him first. We had had months apart, and then a 2-day visit that stirred all our grief. Then, two weeks of mostly silence as far as he knew; for me, two weeks of desperate advocating with those who, humanly speaking, held his future in their hands. Finally, there I sat, and then stood, and then sat again, looking for him.

I saw him a moment before he saw me, before his cousin pointed in my direction. Whatever happened in that moment is lost, because the next moment he saw me, and he ran to me. There was my boy. His backpack was bigger than he was, bouncing all over the place as he ran across that cold tile, past those lines of people coming and going, and wrapped his arms around me as I knelt to hold him tight. Have I ever been so certain or so scared as at that moment? Who was I, that a sad, scared boy would run to me for safety? What would it mean, to take my new son back home forever? What about the baggage that was bigger than he was? What about my own? I needed a benediction, an utterance, a blessing, something to help me get my bearings in this new life.

I needed the joy and ache of the last time Papa called me by my name. We were walking through his yard, talking about the weather, the lake, the plants, and those blasted tumors on his right arm about which “they” weren’t doing enough, he said. He was dying. We all knew it, and we had told him. He faced it bravely when he grasped it, and then the dementia took that knowledge away, a strange and twisted gift for his last days. All of that ached as I stepped ahead for a moment, looking down at the grass, for some odd reason noting the spongey feel of it under my foot. Papa wanted to tell me something, but my back was to him. Then he said it: “Leanne.” I wish I had a picture of my face at that moment. Papa had called me by my name. I think I must have been about 5 years old as I turned toward him. He hadn’t called me by my name in a long time. He knew who we all were that summer, but often fell into frustration referring to anyone who wasn’t present, sighing and saying, “Your mother…” and pausing for us to fill in the blank of that person’s name. But in that moment, he didn’t just know who I was. He knew my name, and he spoke in the voice I had heard since before I was born. In that moment he was the man who taught me how to fish, the one who really believed I could be an astronaut. He was the one who lent me money when it grieved me to ask, somehow in a way that reminded me who I was again – someone he believed in, someone he loved and protected, someone worth loving and protecting. There would come a time in the following months when I cried out to God, “I don’t know how to live in a world with no Papa in it!” But in this moment, a kind and strong man called my name with gentleness, and somehow that was enough. Even in the moment, my heart lifted up with joy and I thought, “Oh, a benediction!”

That uttering of my name held 40 years of loving and being loved. I didn’t expect it just then, but it washed over me and lifted me up when I was exhausted and spent – and it came from a dying man. It was like another time of grieving, 14 years earlier. Papa’s wife, my Nana, had died. Somehow God had put it in my heart to speak at her funeral. I spoke about her chicken soup, and other less pleasant remedies she used to take care of us. I spoke about how she knew us, each of us, in ways that were uncanny and sometimes annoying. I watched their faces as I spoke, and I knew that Someone much larger and more gracious than I was speaking. I saw the wonder, and felt it, as we laughed in the middle of our loss. And then it was time to sit down. I said, “Amen,” and walked down the steps to the front pew. I barely knew what had happened, and had just started to wonder at it, when my brother put his arm around me. “That was the best speech I ever heard in my life.” My brother said that. Did I know, until that moment, how much I wanted him to think well of me? Did I know, until that moment, how much he loved me? I don’t think I did. He spoke the benediction to my eulogy, though I was the only one who heard it.

I don’t know what benediction may or may not have been spoken in the dreary airport that day last October. I’m not sure if what I’m about to write actually happened, or if I whispered it in my head. Somehow, the girl Papa called, “Leanne,” the woman Travis held at Nana’s funeral, took the hand of a little boy in an airport, and said, “C’mon, let’s go home.” Amen.