Love is not in the Christmas story. Not the word, “love,” anyway. The word love is not typically included in those statements one gets from the Social Security Administration, either, and yet I once found love there. Curious, isn’t it? Let’s start with that bureaucratic document.

I was around 20 when I came across one of those statements the Social Security Administration sends out a month or two before a person’s birthday, listing income earned in each year worked. It was my mom’s statement, and though it was none of my business, I read it. I noticed a particular year had markedly more income than the years around it. I remembered that my mom had worked through the summer that year, in the run-up to opening a new school. Then I remembered Christmas that year. I remembered my jaw dropping that Christmas morning as I saw the gifts we received, including a go-kart that we used for years to dig ruts in the yard. I was old enough at the time to wonder how our family could afford the gifts we received that year. I felt a mixture of gratitude and a sense that we didn’t deserve what seemed like extravagance. (You can see in this picture that my only visible feeling was surliness. This is but one proof that there is more to middle schoolers than meets the eye.) 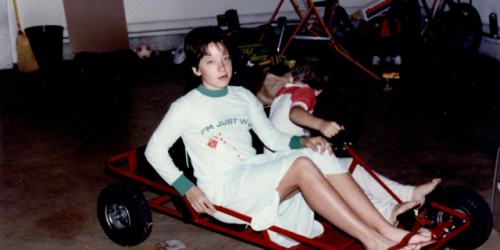 When I found the social security statement years later, I felt those things all over again. I also felt loved. It was crystal clear: when my mom had gained extra resources, she used them to give. As with all love received, it had nothing to do with deserving, and all to do with the heart of the giver. And, though I felt the love in the form of a go-kart one Christmas morning, I didn’t really understand it until I saw that statement. The pieces came together when I looked backwards.

What does that have to do with love and the original Christmas story? Perhaps it illustrates how we simply don’t see the whole picture of any story as it is unfolding. Sometimes, there is a need to look backwards to discover the love.

I’ve been thinking this week about two people looking back on the story of Jesus: Mary, His mother, and John, His disciple.

Consider two statements about Mary found in Luke’s story of Jesus’ birth and childhood. After the shepherds visited, “Mary kept all these things in her heart and thought about them often” (Luke 2:19, NLT). After losing Jesus in the shuffle of travel when He was 12, and then finding him engaged in earnest conversation with the rabbis, “…his mother stored all these things in her heart” (Luke 2:51b, NLT). But if she stored all those things, and thought about them often, how do we know? How did Luke find out? We have a clue in John’s Gospel.

“Standing near the cross were Jesus’ mother, and his mother’s sister, Mary (the wife of Clopas), and Mary Magdalene. When Jesus saw his mother standing there beside the disciple he loved, he said to her, ‘Dear woman, here is your son.’ And he said to this disciple, ‘Here is your mother.’ And from then on this disciple took her into his home”
(John 19:25-27, NLT).

Mary lived with John after Jesus’ death and resurrection. Luke interviewed the eyewitnesses and written accounts of Jesus’ life (Luke 1:1-4). He alone included details that only Mary could have known. Though Catholic and Protestant, and Eastern and Western churches have different traditions about how long and where Mary lived after Jesus’ resurrection, the fact that she lived with John is clear in Scripture. So, either Luke interviewed Mary directly, or he interviewed John, who lived with Mary for at least some number of years. We know she cherished all those moments in the Christmas story because she told someone that she did. We know those details because she told the story in hindsight, after everything else in Jesus’ earthly ministry was accomplished. I wonder how often, in the years of Jesus’ ministry and afterwards, Mary caught her breath as she understood in some new way how all the pieces fit together. How did all the knowing and not yet knowing play out in the rest of her earthly life? I love to imagine her telling the story of her visit to Elizabeth, or Jesus’ birth, or what it could possibly have been like to watch Him hang on that cross when she had once held him as a baby in her arms.

I have thought about John this week, because he wrote the Gospel that shows the love in the Christmas story. To us, the four Gospels are finished works, parts of a whole, but that is not how they came to be. Matthew, Mark, and Luke were all written near the same time, almost certainly within 30 years of Jesus’ departure for Heaven. John wrote His Gospel around 90 AD. So, will you imagine that with me for a moment? For years after Jesus’ life, death, and resurrection, His story was first passed on through the oral teachings of His disciples, and then recorded by eyewitnesses and Luke, who interviewed the eyewitnesses. But there was no Gospel of John. That means there was no love in the Christmas story for a really long time. John seems to have written purposely to supplement the original Gospels, and to tie all the pieces together with love. Matthew, Mark, and Luke mentioned the word love an average of 9 times each. John used the word love 39 times in His Gospel. Including these…

“For this is how God loved the world: He gave his one and only Son, so that everyone who believes in him will not perish but have eternal life” (John 3:16).

“God showed how much he loved us by sending his one and only Son into the world so that we might have eternal life through him. This is real love—not that we loved God, but that he loved us and sent his Son as a sacrifice to take away our sins” (1 John 4:9-10).

If those things were true at the cross of Christ, they were also true at the manger. John looked back across time and saw love all through the story. What do you see?

Here is a thought experiment for this week. Slowly read each scene in Matthew 1-2 and Luke 1-2. At each one, ask yourself, “where do I see love in this story?” So, for example:

And so on. Count on the fact that John was right, and look backwards to find God’s love in the story of His Son.

And then, in light of that story, look back over your own. Where do you find love? Where is it missing? The season of Advent calls us to savor the love and lament its absence. May we be faithful this week to do both.

Comments Off on Fourth Sunday of Advent

Filed under Being Sam